Jacob Stewart, of Yankton, was the recipient of the 2021 Exceptional Employee Award

presented by the South Dakota Conference on Developmental Disabilities. Ben Hanten, of Ben’s

Brewing Company, was the recipient to the 2021 Exceptional Employer Award. This was a first ever, State of South Dakota Conference of Development Disabilities. Nominations from across the state were submitted in these two categories. Both Jacob and Ben were honored in Sioux Falls on

Jacob started working at Dairy Queen in March of 2016, when he was in high school. General Manger, Greg Enright, has this to say about Jacob: “Jacob is a valued member of our Dairy Queen family. He always comes to work with a smile on his face and makes others happy when they are around him. He’s always happy and this rubs off on others. Jacob is able to make his coworkers laugh and is always a hard worker. He is reliable, very nice to others and never complains when asked to do something. Jacob just gets it done with a smile on his face. We really wish that we had a lot more employees as great as Jacob. “  When Jacob is asked how he likes his job, he will often answer, “I love my job! Some people don’t like to go to work, but I do!”

Ben Hanten was nominated by ABS Employment Specialists Jane Wuestewald and Heather Budihas.  They had this to say about Ben: We have worked with Ben since 2010 and he has been such an asset to ABS. He has opened his business to us so that we could do job assessments to assess people’s skills and abilities. He has also hired many people that we support. When he has an opening, he has reached out to us and asked if we have anybody interested in a job with him. Ben is always open to problem solving and willing to make accommodations. He is receptive to working with job coaches as well as helping them to brainstorming ideas and always reaches out when there are concerns that need to be worked through. Ben’s expectations are the same whether a person has a disability or not. He has also been very open with the Yankton Community on sharing his positive experiences with hiring people with

disabilities and to focus on what a person is able to do and not on what they might not be able to do. 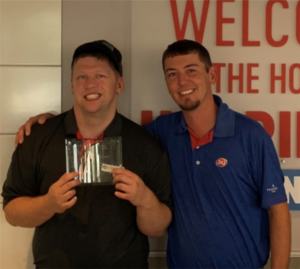 Jacob Stewart accepts his award along with his boss Greg Enright of Dairy Queen. 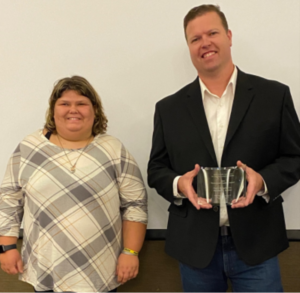 Ben Hanten accepting his award along with employee Lindy Stevens

Toby’s Time at the Asylum

We may request cookies to be set on your device. We use cookies to let us know when you visit our websites, how you interact with us, to enrich your user experience, and to customize your relationship with our website.

Click on the different category headings to find out more. You can also change some of your preferences. Note that blocking some types of cookies may impact your experience on our websites and the services we are able to offer.

These cookies are strictly necessary to provide you with services available through our website and to use some of its features.

Because these cookies are strictly necessary to deliver the website, refusing them will have impact how our site functions. You always can block or delete cookies by changing your browser settings and force blocking all cookies on this website. But this will always prompt you to accept/refuse cookies when revisiting our site.

We fully respect if you want to refuse cookies but to avoid asking you again and again kindly allow us to store a cookie for that. You are free to opt out any time or opt in for other cookies to get a better experience. If you refuse cookies we will remove all set cookies in our domain.

We provide you with a list of stored cookies on your computer in our domain so you can check what we stored. Due to security reasons we are not able to show or modify cookies from other domains. You can check these in your browser security settings.

We also use different external services like Google Webfonts, Google Maps, and external Video providers. Since these providers may collect personal data like your IP address we allow you to block them here. Please be aware that this might heavily reduce the functionality and appearance of our site. Changes will take effect once you reload the page.