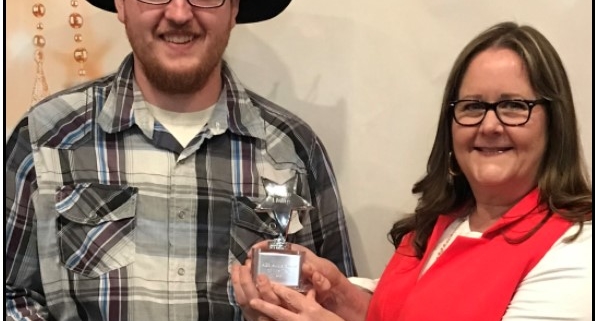 Congratulations Austin Millin in receiving this year‘s Outstanding Achievement of the Year Award!   Each year during the Recognition Banquet, we honor one person who has reached extraordinary achievements over the past few years.  Austin graduated high school in 2017 while working part time at Hy-Vee.  In March of 2018, Austin decided he needed to take the next step in his life and began looking for a full time job.  He has been employed at Cimpl’s full time for over a year, where he is a valued team member and employee.  Working full time has helped Austin to live the life he wants to live.  Some examples of Austin’s accomplishments are moving into a new apartment, buying a car, visiting family in Rapid City and going to a concert in Sioux Falls with friends from Cimpl’s.  Austin has a love for sports, which has grown through his participation in basketball, track and softball.  He was recently named team captain of his basketball team. Austin is a very loyal, caring young man who is known for always helping his friends when they are in need. Austin has worked very hard and accomplished so much in the past year, for this we celebrate Austin as this year’s ABS Achievement of the Year recipient!